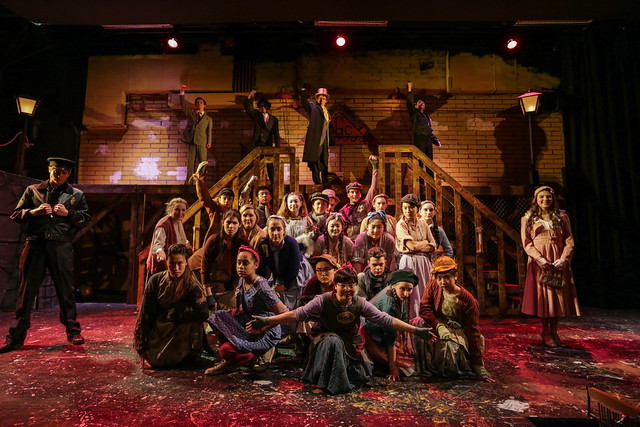 One of the most delightful aspects of producing URINETOWN is telling people the title of the show, which is a not-so-subtle play on words. The uninitiated mull it over for a few moments, usually arriving at the conclusion that we’re doing a show called “You’re In Town” because what they thought they heard couldn’t possibly be the premise for a musical, could it?! The implied crassness was played up on the original publicity posters, where a scarlet annotation above the Urinetown logo, states: “Is this really the title?” Even the characters in the show question the wisdom of such an uncouth name. In the opening number, Little Sally (Ally Casillas ’19) observes that a bad title and bad subject matter “could kill a show pretty good.”
This is the sort of cheeky, self-referential humor that runs throughout this exuberant show, which is packed with rousing and infectious songs, sophisticated wordplay, and the occasional cringe-worthy pun thrown in for good measure. It would take a lot more than a bad title to eradicate a show as enjoyable as URINETOWN.
From one of the musical's numbers: It’s the oldest story/Masses are oppressed/Faces, clothes and bladders all distressed/Rich folks get the good life/Poor folks get the woe/In the end, it’s nothing you don’t know.
URINETOWN takes place in a dystopian near-future, where decades of drought have led to catastrophic water shortages, and private toilets have been outlawed. The water supply is now controlled by the Urine Good Company, which charges people a fee to take care of their private business at public “amenities.” To relieve oneself anywhere else has been outlawed. The oppressed (and desperate) masses, led by amenity custodian Bobby Strong (Jacob Miller ’18), eventually rise up, and the story plays out from there.
URINETOWN is both homage to and an outlandish spoof of the Brechtian theater of outrage and provocation that also manages to lovingly send-up a variety of theatrical conventions and genres.
Our cast of 28 talented triple-threats (singers/dancers/actors) had a fantastic time putting this show together. Come and join us in the Liu/Cheung Theater from May 18-20. Tickets are free, but must be reserved to guarantee a place. Go reserve your tickets here. All shows start at 7:30 p.m. For more information, please email Director Stefanie Plumley.